US immigration is filled with forms. There are forms for visitors, forms for citizenship and forms for just about everything in between. Many of the forms are filled out by you or your immigration lawyer when you are asking for an immigration benefit, such as a visa or green card. Other forms, such as a naturalization certificate or work permit, are issued to you by immigration authorities, are extremely valuable, and should be safeguarded. 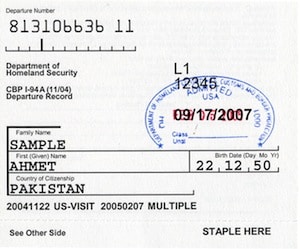 One of the most important forms issued to non-immigrants is the I-94 card, which is issued at the US border (land entry, airport, sea port, etc). The I-94 form contains two parts and is perforated for easy separation. The first part is filled out by the traveler either at the border or before arrival — you may see foreign nationals filling out these forms on the airplane just before they land in the US — and asks questions related to the person’s admissibility to the US. Depending on the answers, a person may be turned away at the border. If the traveler fails to answer the questions truthfully, it could have long-ranging consequences, including being permanently barred from ever coming back to America.

The bottom part of the I-94 form is stamped by the border officer and indicates the port of entry, date of entry and how long the person is permitted to remain in the US. The I-94 card is typically stapled into the visitor’s passport and is official evidence that the visitor entered the country legally and is currently authorized to be here. If a law enforcement officer requests proof of a visitor’s legal right to be in the US, failure to show the I-94 card could have negative consequences.

I-94 Form to Prove Legal Entry

Certain non-immigrants, such as employees or immediate relatives of US Citizens, may have the opportunity to apply for a green card while physically present in the US. The case starts by filing for I-485 and, along with it, a copy of the I-94 to prove that the applicant legally entered the United States as legal entry is typically a requirement. Without form I-94, adjustment of status may not be possible and, even worse, the applicant may find himself in deportation proceedings. If the I-94 card has been lost, there may be a way to obtain a replacement I-94 card or get the information immigration officials require to prove legal entry. If your I-94 card has been lost, you should consult an immigration lawyer prior to filing for adjustment of status.