Parole in Place and Adjustment of Status for Military

Like magic, Parole in Place (PIP) turns someone who entered the country without inspection (EWI) into an inspected alien without them ever having to set foot outside the US. This is important because, with very few exceptions, one must have a lawful admission to adjust status to lawful permanent resident (green card). Without it, someone seeking a green card, for example as the spouse of a US Citizen, would have to return to his or her home country to finish processing at the US Embassy or Consulate there. For some, this is not an attractive option — if they have been in the US for a long time without authorization leaving could trigger a 3 or 10 year bar to immigrating.

In fact, the inability to adjust status in the US without a lawful admission is one 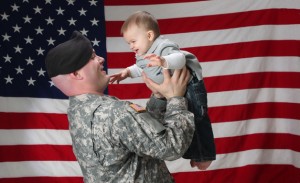 reason why we have so many undocumented immigrants today. While it is true that the majority of people likely don’t have a way to immigrate anyway (i.e. through family or employment), some could qualify for a green card if only they didn’t have to leave the US to do their processing.

Parole in Place has always been a discretionary benefit — approved only on the whim of the Director of the alien’s local USCIS field office. It was one of those things that immigration lawyers whispered about because, like the Loch Ness Monster, nobody had ever really seen it. The circumstances had to be truly dire for a Parole in Place to be granted.

A few years ago, however, USCIS announced that it was encouraging field office directors to consider Parole in Place for the spouses of all US military members. Immigration lawyers and JAG officers rejoiced — finally a way to help those putting their lives on the line. Unfortunately the feedback wasn’t all rosy — there were some field offices that remained hostile to any benefits for undocumented immigrants, even given (or because of?) their relationship to active duty military. You could ask for Parole in Place, but there was no guarantee that you’d get it.  Also, unanswered questions abounded — did the spouse have to be deployed or deploying or could any status qualify? Could they be Reserves or did they have to actually be active duty? Could we extend it to children and parents? Since a Parole in Place request virtually gave immigration enforcement officers a map to the alien’s present residence, not everyone was keen to try it and not only fail but get their client deported in the process.

Lucky for me that I practice in Los Angeles. I used Parole in Place for an active duty soldier (but not deploying) and it worked exactly as advertised.

Last week, USCIS finally provided guidance on the Parole in Place program as it relates to military. Yes, you can apply for children and parents too. No, you do not have to be active or deployed — members of the Selected Reserve qualify as well. In fact, even former active duty and selected reservists qualify. It’s still left up to the local field office director whether or not to grant this discretionary benefit but, at least in Los Angeles, it is an immigration process definitely worth considering.